As you hopefully know from the rules, the "regular season" lasts through the first nine days of the Fortnight, and Day 10 is Championship Day. The schemes below, tell you who you'll face on Championship Day based on your finish after the regular season, along with what's at stake.

For the day 10 matchups, all Private Divisions follow a 1 vs 2, 3 vs 4, 5 vs 6, etc scheme based off the final standings after day 9. If you division has an odd number of players, the person who finished last will not have a day 10 matchup.

Scheme for the North conferences of Endtimes, Doomsday, and Cataclysm:

Scheme for the South conferences of Endtimes, Doomsday, and Cataclysm:

Scheme for the North conferences of Calamity and Desolation:

Scheme for the South conferences of Calamity and Desolation:

Scheme for the North Conferences of Armegeddon, Eschaton, Ragnorak:

Scheme for the South Conferences of Armegeddon, Eschaton, Ragnorak:

This may look complicated, but it's simpler than it appears.

For instance, take this chunk from the top scheme: 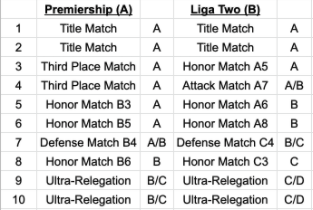 Here, the person who finishes 7th in the Premiership after Day 9 will play in a Defense Match against B4 (the 4th place finisher from Liga Two), with the winner going to A (Premiership) and the loser going to B (Liga Two) for Fortnight VII. When there's no slash in the letter column, it means position for the next Fortnight is already determined—for example, the top three finishers in Liga Two will all be promoted to the Premiership (A) no matter what happens on Championship Day.